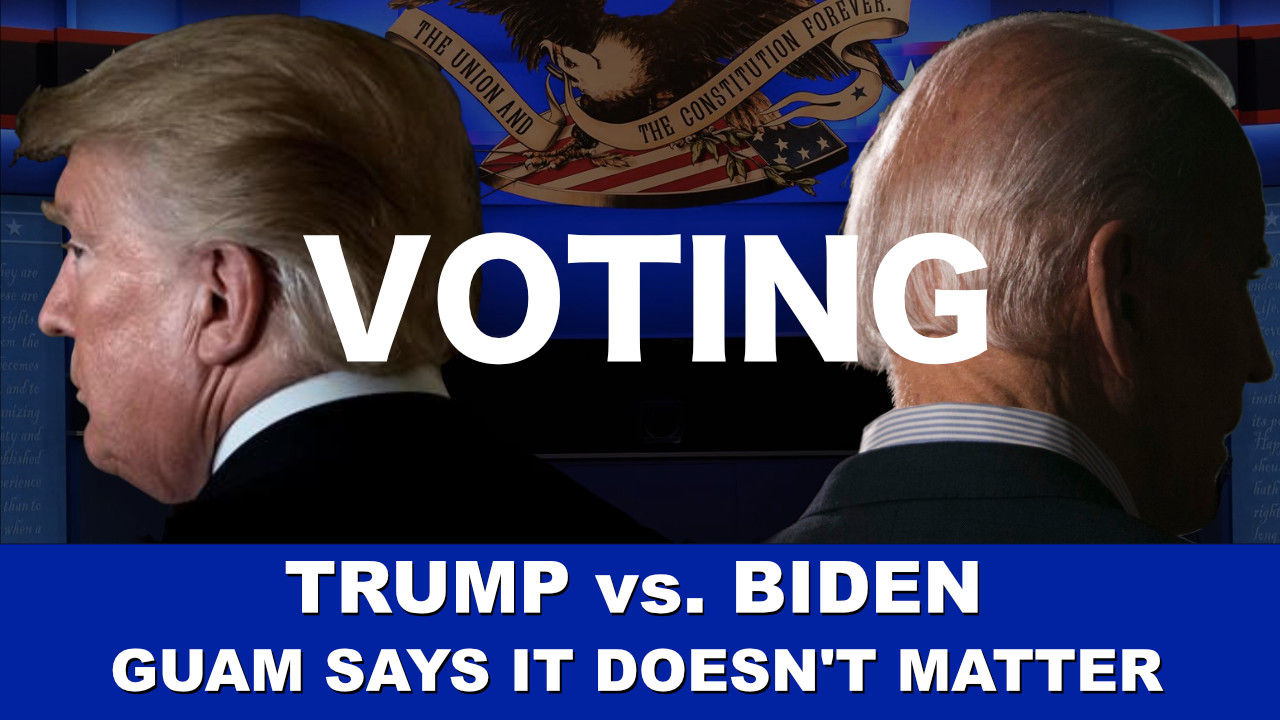 Voting for the US President as Guamanians

The topic today is voting for the president, and Guam’s votes not counting. We were with local Chamorita, Freeda Chams while she was out and about and on the beat. Together we interviewed some local manåmko about the topic, and here is what they had to say.

“We figured when a black man from Hawaii became president that he would have paid Guam some attention. But no, we’re still treated as know-nothings. I suppose that’s why our votes don’t count… They just don’t know anything about us.”

“Hey what the heck? How about us giving us Guamanians some respect? We’re Americans also! Don’t you know? We even have the little book with an eagle on it to prove it. So, we’re citizens, the same as other Americans.”

“We all go to American style schools. We speak perfectly intelligible English. Many of us as well as most Americans on the mainland, and some of us even better. In all the ways that count, we are like any other American. So, how is it okay to treat us as if we don’t matter the same? I think there’s something rotten going on here. The ones responsible need to stop being evil meanies. Because we don’t like it, not one little bit. If you’re not going to treat us as equals, then give us our island back.”

Clearly, the local manåmko were very upset. So we showed them this informative video.

The manåmko still couldn’t understand why if they are American citizens that their vote for president doesn’t count. So, we tried explaining that the Insular Cases endorsed the U.S. policy of acquiring territories and their peoples,

“without conferring the rights of citizenship on subjects who were racially unfit for it.”

We had to further explain that the US Court rejected earlier precedents that defined the United States as including both states and territories equally subject to the provisions of the Constitution. In 1898 they figured it was perfectly logical that a mostly white nation should treat darker colored indigenous people differently than the citizens of the states.

The Court upheld Congress’s unfettered power over these newly acquired people and their land:

“Congress has full and complete legislative authority over the people of the Territories and all the departments of the territorial governments. Congress may organize a local territorial government. It may sell its public lands to individual citizens or may donate them as homesteads to actual settlers. In short, when once acquired by treaty, it belongs to the United States, and is subject to the disposition of Congress.”

“Wait, wait, wait,” said Mrs. Askan-Wy. “I don’t understand, you’re saying that Congress owns us? Are we all just somebody else’s property on our own island, which they claim as theirs also? Owned by a landlord ruling from the other side of an ocean? To me, I think that makes us slaves, or at best, subjects. Do we really belong to — other Americans, is this true?”

All we could say is, well, sort of. Then we tried to explain Justice Brown’s opinion on the matter.

Justice Brown, writing for the Court, recognized that the United States could use its unlimited territorial power to determine the status of an acquired territory’s inhabitants and could consequently stop the theoretical influx of foreigners into the United States.

“If their inhabitants do not become, immediately upon annexation, citizens of the United States, their children thereafter born, whether savages or civilized, are such, and entitled to all the rights, privileges and immunities of citizens. If such be their status, the consequences will be extremely serious.”

“If those possessions are inhabited by alien races, differing from us in religion, customs, laws, methods of taxation and modes of thought, the administration of government and justice, according to Anglo-Saxon principles, may for a time be impossible; and the question at once arises whether large concessions ought not to be made for a time, that, ultimately, our own theories may be carried out, and the blessings of a free government under the Constitution extended to them.”

“Hey,” said Betta Tu Befree. “That Judge Brown is a racist.” Laughing, he continued,  “His name is Brown and he doesn’t like brown people.  He must be scared we’re going to go paddle over there, move in next door and be his neighbors. Wait a minute, I just thought of something. We are all over here on Guam protesting for, “Black Lives Matter.” Yet, we’ve been second class citizens on our own island for hundreds of years. Must just be that black lives matter, and brown — not so much. They’re probably just jealous of our beautiful golden brown tans. So, anyway why do we need to put up with this?”

So we tried to explain further to the manåmko. That Justice White noted that,

“if it be ceded by treaty, the acquisition is confirmed, and the ceded territory becomes a part of the nation to which it is annexed, either on the terms stipulated in the treaty… or on such as its new master shall impose.”

Betta Tu Befree blurted out… “Holy crackers, that guy’s name is White, and he’s a racist too! With those names, it’s no wonder that they’re so gosh darn color sensitive. It would’ve been funnier though if Judge Brown was instead Judge Black. Then it would be Judges Black and White against the brown people.”


Russ Pectus and Justa Askan-Wy laughed along. Even Freeda Chams laughed. And she thought to herself… We may all be property, but at least we have a sense of humor about it. Freeda Chams then commented to the group of wise manåmko… “and they tell us we’re all equal.”

Follow-up With US Congress

We followed up by contacting the United States House of Representatives. When we asked about how we can vote.

They said to us,

“Move here, because we’re here, and we can vote. So we guess you could also.”

“By the way, sorry that we make our legal decisions based on what some prejudice white guys from 120 years ago decided.”

If you can’t take a joke, go away, so you can vote too.

The Alien-Citizen Paradox and other Consequences of U.S. Colonialism

Warning to fact-checkers. Don’t come to Guam, because we have slingstones!

Give us representation, or give us independence!

Guam is an American colony, no matter what the arrangement is called.

The post and video are a humous, but the situation is real.